Deconstructing the Spiritual Experience of Architecture

What if having a spiritual experience is as easy as opening a door? What if neuroscience can help us better understand architecture as a gateway to God? What if religions knew the power of their architecture? 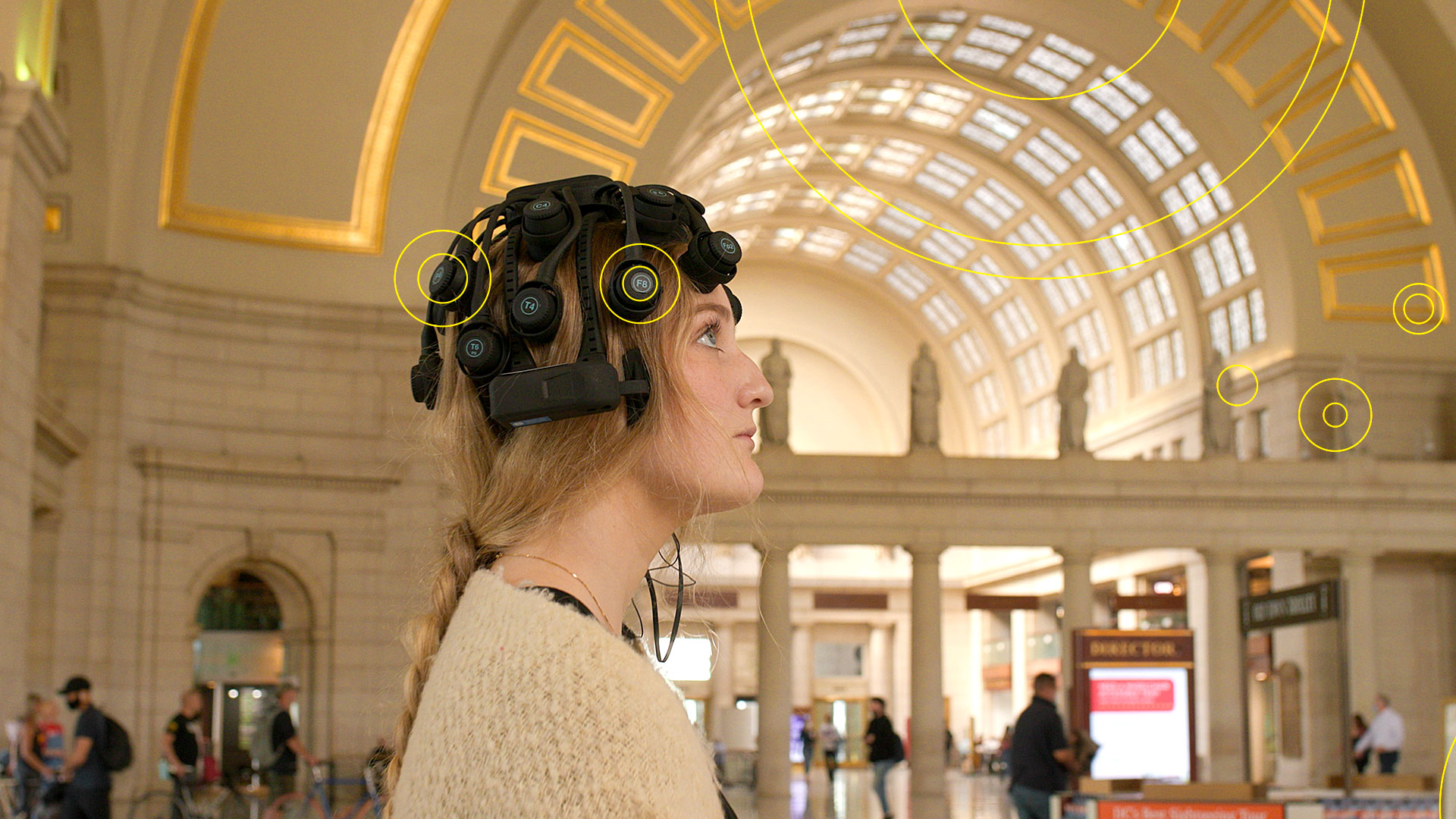 Among the many significant buildings in Washington, D.C. that thousands of people visit regularly, are two less than three miles apart: Union Station and the Basilica of the National Shrine of the Immaculate Conception.

Though close in distance, these structures couldn’t be further apart in terms of the functions they serve. The Basilica, affectionately known as “America’s Catholic Church,” is a sacred structure, a place for meditation and worship. Union Station, in contrast, serves purely secular purposes as a hub for commuters and travelers coming in and out of the nation’s capital.

Still, both buildings have architectural features in common. Both have soaring domes, vaulted ceilings, expanses of marble, finely crafted ornamentation and impressive statuary. Their public areas are similar in size. And both are beautiful.

Do people experience beautiful buildings in similar or different ways, depending on function? Do places of worship provoke distinctly more immediate and intense feelings and mental states? Can 21st-century neuroscience successfully be put to the task of helping us better understand how architecture can elicit spiritual responses?

With funding from Templeton Religion Trust, Julio Bermudez, Ph.D., a professor in the School of Architecture and Planning at the Catholic University of America, is leading an interdisciplinary pilot project that begins to investigate such questions. Uniting researchers in architecture, neurology, cognitive psychology, computer science, and religion, the project aims to test hypotheses, develop methodologies, and produce preliminary data that can lead to further studies and a deeper, evidence-based understanding of how architecture affects people’s spiritual experiences and understanding.

From Caves to Cathedrals

Buildings serve a variety of functions in our lives. They’re where we live, where we work, where we go to relax or find some form of entertainment. They’re also where many of us go to practice our faith.

We know from thousands of years of history that people have spent their best resources … to design and construct architecture that allows people to access states of being that are spiritual.
– Julio Bermudez, Ph.D., School of Architecture and Planning, Catholic University of America

The earliest buildings in human history were created to provide shelter – a step up from caves. But also since the beginnings of civilization, some structures were created for a higher purpose: to satisfy the seemingly irresistible human urge to experience a spiritual realm of being. The result has been some of the most stunning architecture in the world: the 10,000-year-old Göbekli Tepe site in Turkey, the Pantheon in Rome, the Pyramids in Egypt, the Chartres Cathedral in France, as well as more contemporary examples such as the Lotus Temple in New Delhi, India – to cite just a few.

“We know from thousands of years of history that people have spent their best resources and incredible amounts of time to design and construct architecture that allows people to access states of being or understanding that are spiritual – feelings such as calmness, awe, wonder, enlightenment, wellbeing, wholeness, joy,” notes Bermudez.

“Academic studies typically focus on understanding sacred architecture as objects – the quality of these spaces, how they’re built, their form and function,” he continues. “However, the effects are much harder to know.”

Researching architectural impact has mostly focused on“qualitative phenomenological responses” – taking people at their word as they describe their experiences. And, absolutely, these first-person accounts have significant value, Bermudez maintains. “Phenomenology is a branch of philosophy going back to Emanuel Kant who determined that there is no reality other than an experience of reality,” he notes.

But now, he believes, science can take us further.

Advances in neuroscience and medical instrumentation have opened up new avenues for measuring brain activity and bodily changes that allow us to map how we physiologically respond to our experiences.
– Julio Bermudez, Ph.D., School of Architecture and Planning, Catholic University of America

“Advances in neuroscience and medical instrumentation have opened up new avenues for measuring brain activity and bodily changes that allow us to map how we physiologically respond to our experiences,” Bermudez explains. “With the arrival of neuroscience in our 21st century, we’re now able to peek into the biological and neurological effects by using medical devices that can measure altered states.”

To date, however, almost no research has applied these technological advances to the experience of architecture. Even a 2014 study of contemplative architecture led by Bermudez was confined to a lab due to the immobility of measurement devices available at that time. Measurements of people’s brain activity while viewing images of contemplative buildings were recorded, revealing higher activity in areas associated with embodiment and emotion along with a deactivation of the pre-frontal cortex where we think and make judgments. But even the insights resulting from this research – for example, “buildings may induce insightful, profound, and transformative contemplative states” – remained speculative without being put to the test of in-the-moment, three-dimensional experiences.

Equipped with the latest-generation mobile EEG system to record brain waves plus smart devices to measure heart rate, blood pressure and skin conductance levels, 30 research participants, all Roman Catholic, are each visiting Washington’s Union Station and the Basilica on different days, following a predetermined path with five stopping points. At each point, researchers are gathering readings from the instruments and asking simple questions about the experience. Afterward, they are conducting robust exit questionnaires.

Then begins the arduous process of looking for patterns in a huge amount of data – a vast accumulation that may for the first time provide a scientific understanding of how sacred architecture facilitates contemplative and transcendent experiences.

“We have first-person, subjective accounts, and we have what I call third-person, more objective brain-based accounts. Our work is an attempt to bring them together in such a way as to enrich and enhance understanding of both,” Bermudez explains.

“Yes, people can induce a spiritual state by meditation or prayer – I would call this internally induced – I don’t need anything else,” he continues. “However, our hypothesis is that the built environment can, with much less effort, put you in that state. By opening the door of a temple, a church, a synagogue, a mosque, or any other spiritual space and spending just a few moments there, you can attain spiritual understanding and experience. Just by opening the door and stepping inside.”

By relating research participants’ assessments and the quantitative data of their neurological and physical responses, the researchers hope to lay important groundwork for the continuing pursuit of integrating religion and science to better understand spirituality in human lives.

They believe their work could launch a new area of academic study – Bermudez has termed it “the neurophenomenology of theological aesthetics” – and contribute to the developing movement of evidence-based design.

Within that context, Bermudez views his team’s research as expansive, not reductionist.

“Understanding our spiritual being is a fundamental point of our humanity which each generation explores for new understanding. We are not the only ones trying to add to this knowledge base of humanity, and we humbly acknowledge that,” he notes. “We’re not trying to reduce or dismiss the subjective dimension of it. But we are looking at the relationship between these different measures, trying to marry them in the hope that our work can help others to design better. Because, let’s face it, not every spiritual space produces the desired effect. So, there is a practical dimension to our work.”