HomeFeatured StoriesReading Beyond the Pictures

Reading Beyond the Pictures

What if both text and image in religious art are essential to understanding? What if religions understood more about the interplay of visual art and text? What if the effect of religious art is more deeply understood through text? 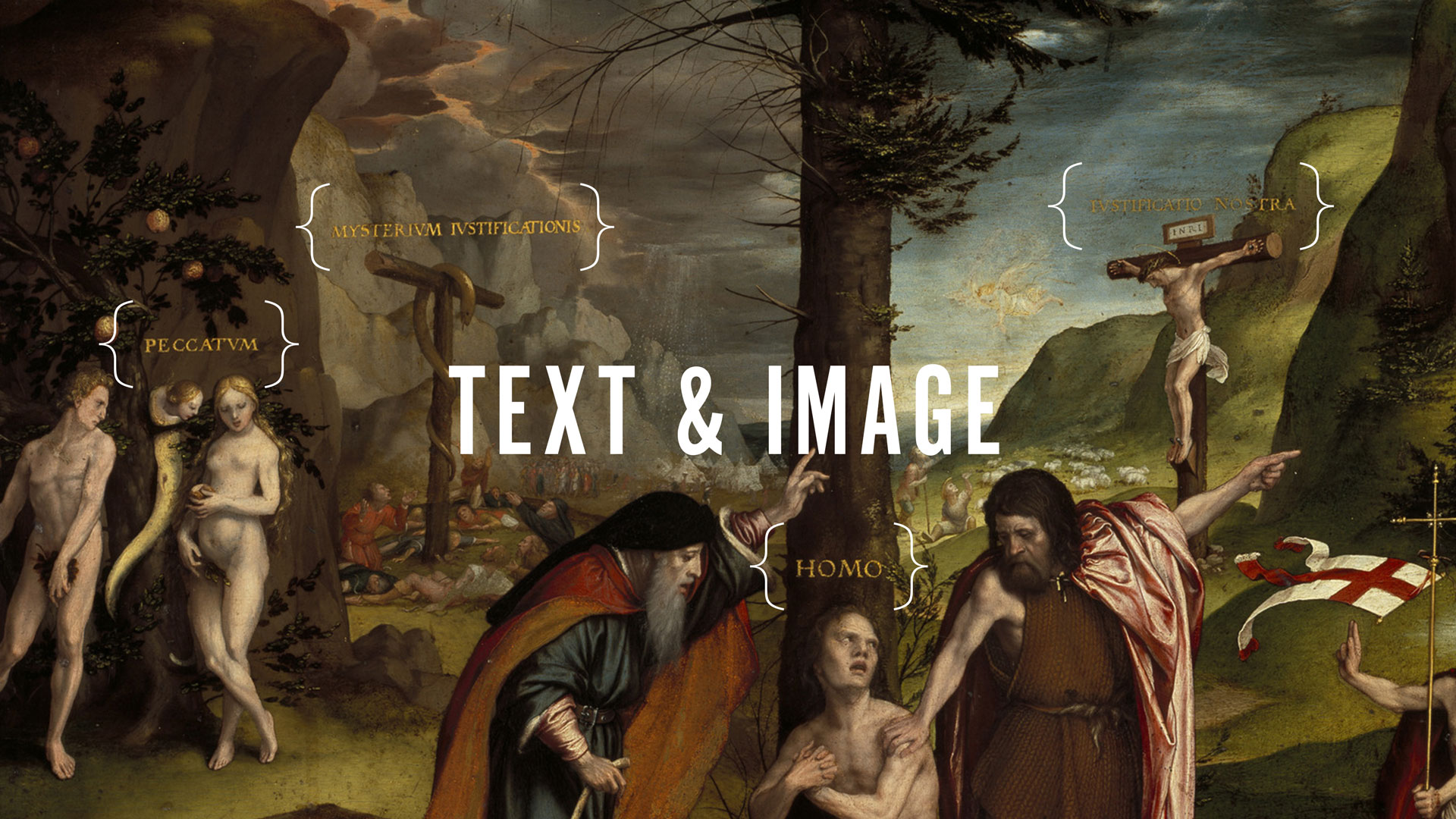 It’s easy to take the interplay of words and images for granted. We see instances of it almost every day – in advertisements, political cartoons, and graffiti, for instance. Usually, it’s obvious why the words are there – even though it’s said that images speak louder than a thousand words, often they don’t speak clearly. Words can, in some cases, help explain what we’re seeing and more clearly communicate meaning.

That interplay of intention and effect may be obvious even in some of the art we see in museums, galleries, or other designated viewing contexts. Consider pop artist Robert Indiana’s famous LOVE image. Originally designed as a Christmas card commissioned by The Museum of Modern Art (MOMA) in 1965, the word is inseparably also the image, described by MOMA as “an emblem of 1960s idealism.”

While the word “love” seems like a straightforward message, sometimes text in art may be more enigmatic or even defy literal interpretation. Why, for example, did Belgian painter René Magritte include the text “Ceci n’est pas une pipe” (“This is not a pipe”) beneath a bluntly realistic image of a pipe?

Meanwhile, since at least the 19th century, many artists and theorists have considered questions about the artist’s intention to be questions not worth asking. The purpose of art, they contend, is “art for art’s sake” – that is, divorced from any didactic, moral, political, or everyday function. According to this view, art with a clear message, for example from the inclusion of text, is not “art” at all, but rather propaganda. That or the text is meant to be viewed as a formal element only, not intended to reflect deeper meaning.

And yet, throughout history and even today, some artists have viewed their art as a form of communication. At the same time, some researchers assert that viewers pay attention to the effort that has gone into the art, prodding them to ponder intention and the importance of what the artist is “saying.” As part of this communication, perhaps to narrow the possibilities of interpretation, or to condition the viewer to a particular state of mind, artists have sometimes added text to their images. This is an especially common phenomenon in religious art. Some have argued that religion is a domain where viewers’ receiving the art “correctly” can be of special concern – a version of the propaganda claim, which neglects the central role of the word in, for example, Christian theology.

Clearly, not everyone thinks the same way about the purpose and effects of visual art, past and present, and the occasional occurrence of textual elements adds even more fodder to the debate. But it’s precisely that diversity of questions and viewpoints that has intrigued Brendan Wolfe, founder and principal editor of the St. Andrews Encyclopaedia of Theology.

With funding from the Templeton Religion Trust, he’s leading a research project to investigate the cognitive implications of text-inclusive artwork from both the viewers’ and the artists’ perspective, starting with religious art from the 16th-century European Reformation, when text in art was particularly prevalent. Applying cognitive psychological tools to investigate questions that are embedded in both art history and theological history, the project is a collaborative effort with Dhanraj Vishwanath, lecturer in psychology and neuroscience at St. Andrews, and Nicole Ruta, a senior research fellow with a background in cognitive neuroscience, psychological rehabilitation, and neurobiology.

“We’re applying the tools of cognitive psychology to investigate questions and developments in art history – specifically, the inclusion of text in images at various points in history of religious art,” Wolfe explains. “We’re posing questions like ‘why was this done?’ And ‘what can we learn about art in general and religious art in particular from this practice?’ To answer them, we are attempting a project that is theologically and psychologically rigorous.

What can be discovered about the effect of text in religious art? In what ways might it enhance or diminish a viewer’s response? What happens when the research methods of today’s cognitive scientists are applied to investigations of embedded text in religious art? What new understandings of art and spirituality might result

Drawing on prior investigations and the expertise of cognitive co-researchers, the project includes a series of experiments in which the responses of research subjects who view images that include text are compared to those generated when viewing images that lack text. The team will also engage with contemporary artists about their experience of producing text-inclusive religious art.

“There has been quite a lot of historical reflection on certain periods of art, and the general remarks about text-inclusive artwork are negative, that it is a failure to trust the art itself, that it requires the inclusion of script to convey anything, whereas successful art would have conveyed the same ideas and would have had the same effect without needing the deployment of text to do it. And that could be. As scientists, we’re not going to prejudge the results,” says Wolfe. “It seems to me unlikely that quite successful and highly regarded artists were betraying their own medium by also sometimes including text, and more likely that there’s they’re there attempting some other forms of positive dynamic being attempted, whether or not they succeeded.”

The research team intends to use neurophysiological methods of data collection such as eye-tracking in addition to the self-reported psychophysical and emotional responses of research subjects to collect data in four primary categories:

“We’re looking at how the relationship between the viewer and the art or the viewer and the artist is consciously modified, with text as the clearest example,” Wolfe explains. “Another direction is a more theoretical one, which is considering the very phenomenon of conditioning viewers’ expectations and putting that into conversation with the latest psychological accounts of the interaction between our expectations of anything with which we’re confronted and the data that we’ve actually received.”

The hoped-for outcome is deeper understanding of the cognitive effects of religious art and continued interdisciplinary collaboration leading to further investigations and new theoretical directions.

“If we can formalize and test this,” Wolfe says, “it will light the way for testing other art historical theses in dialogue with cognitive theories that have currency today.”

Acknowledging that there’s “a tangled knot of historical and contemporary links between religious art and theology which are often ignored by modern art appreciation theory,” Wolfe is hopeful that the science-based methods and findings of this project can begin to untangle and successfully braid the threads of difference.